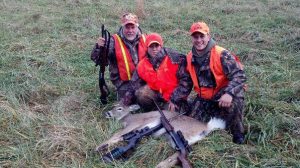 Life is too short to not teach your daughters how to hunt.  This sport is no longer just for men and it’s having a resurgence of newcomers with the popularity of movies like the Hunger Games.  Young girls everywhere are seeing that archery is not only cool but in the movie it depicts a way of life that hunters live by. We are learning and teaching each other how to live off of the land and build a bond between people that hunters understand. Along with this also comes the respect you gain for our land and wildlife.

My dad instilled hunting in my family as far back as I can remember.  In 1975 my dad purchased a large plot of land in Southern Ohio.  He started to build his dream of constructing a hunting cabin to share with his family and friends.  So it began the story of what built our bond.  In early 1981 construction began and I was just a bun in the oven.  Flash forward a few years and my parents have grown their family to a total of five with a younger brother and sister for me.  We spent almost every weekend there for the next decade.

Growing up in the woods was something I will never forget and the memories I have are one of a kind.  Imaginations are stretched when you grow up playing in the great outdoors.  You learn about nature, animals, insects and the endless recreational activities that mother nature provides.  The things I would learn from my dad proved to me to be priceless.

The bond I have with my dad has never been greater.  The older I get the more I want to spend to time with him and my family.  Hunting together whenever we can is my favorite thing to do.  Nothing is guaranteed so spending as much time in the woods with him is what I thrive on.  My dad has taught me everything I know and continues to educate me through his experiences and knowledge.  The thrill of the hunt and watching me succeed makes him more proud now than taking his own trophy buck.  He has filled walls with mounts so watching me and my brother walk in his footsteps is his gratification. He knows he has passed down a family tradition that we will carry on with our own families.

The look on my dads face is priceless when he witnesses a hunting success.  Last year we were on a hunt in early January.  It was the day before his birthday to be exact.  Muzzle-loader season in Ohio and one of our favorite hunts together.  We had been tracking through a foot of snow for miles on end.  Finally we spotted a doe laying down next to a tree on the hillside about 150 yards uphill.  He asked if I wanted to take the shot.  He even offered up his back for stability as I was standing in snow up to my knees.  I wanted to show him that I could handle this on my own so I told him I had this. Took my stance and dialed in on my target with confidence and fired.  Smoke is all around me and I can’t see anything but I hear what sounds like laughter and someone hitting the lottery.  My dad screaming, “you got her sis, you smoked her good.  She didn’t even move from where she was laying.”  This was followed by a quick high five and a smile that lasted all day.  Happy birthday, Dad!  These are the days I live for and I think it’s safe to say he does too.

Please teach your daughters to hunt.  Take them with you.  Even if they aren’t ready to get involved in the hunt let them be there to tag along.  They can take it all in and learn what hunting is all about. Best of all they may find out that it is something that can turn into a real family bond.  My dad and I share something very special and it is the love for hunting and the great outdoors.

3 thoughts on “Teach Your Daughters to Hunt”